‘A page of history has turned'.

Chalabi knew very well that Iraq, even before Syria, was a victim of the hostility between Washington and Tehran, says Gareth Smyth 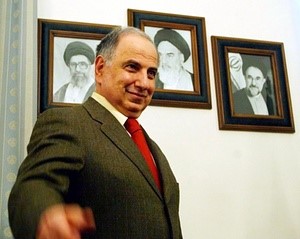 In November 2005 I went to see Ahmad Chalabi, then Iraq’s deputy prime minister, on the top floor of a large Tehran hotel. It was difficult to have him focus on my questions, as both he and Zaab Sethna, his Zoroastrian Pakistani advisor, were as excited as children in poring over a huge pile of art books.

These had come from Tehran’s Museum of Contemporary Art, which the pair had visited after president Mahmoud Ahmadinejad had asked them, with their meetings finished, what they would like to see. Chalabi had not only been aware of the museum’s many treasures – including Picasso, Monet, Jackson Pollock and Andy Warhol - he knew the New York dealer who had bought many of them on behalf of Farah Pahlavi, wife of the Shah.

Chalabi, who has passed away at the age of 71, was a link to an older, more humane Iraq. This was a more nuanced and culturally rich place than the Iraq of Saddam Hussein, Moqtada Sadr and the Islamic State (Isis).

He saw no contradiction between being a proud Iraqi nationalist – who spoke even English with a heavily accented ‘qaf’ – and a Shia with close links to Iran and Lebanon. This made him hard, if not impossible, to understand for those who wanted to simplify the world into black and white.

When the Americans turned against him in 2004, first with press briefings and then by raiding his Baghdad home, there was wide consternation that Chalabi possessed a Qur’an that had been a gift from Ayatollah Ruhollah Khomeini. Obviously, chimed much of the press, Chalabi was an Iranian spy.

I first met Chalabi in 1992 in Salahuddin, in the part of northern Iraq controlled by Kurds in the aftermath of the 1991 US-Iraq war. Chalabi had entered Iraq through Iran, where he had been detained briefly at the border, no doubt to emphasise Tehran’s interest. But as the Kurds held elections, Chalabi lost no time in arguing for a new Iraqi opposition umbrella group with a closer relationship with the US.

In 1993, he gave a lecture in the School of Oriental and African Studies, London University, on the importance of re-establishing the rule of law in Iraq: this was at the book launch of Chibli Mallat’s study of Mohammad Baqr Sadr, the Shia cleric murdered by Saddam in 1980. Around that time, Chalabi also ‘borrowed’ my copy of Victoria, the epic novel written by Sami Michael, the Iraq Jewish writer who had with some reluctance ended up in Israel.

Like Michael, Ahmad’s daughter Tamara Chalabi evoked an older, more pluralist Iraq in her 2010 family memoir, Late for Tea at the Deer Palace, a book opening with a map of Baghdad in 1917, a time when the city was quarter Jewish. Tamara dedicated the book to Hassan, her uncle and Ahmad’s elder brother, who had established the Islamic university in Lebanon.

Like us all, Ahmad Chalabi had faults. It was often said he couldn’t suffer fools - among which history may well include Paul Bremer, the hapless US viceroy who headed the occupation’s Coalition Provisional Authority. The clearest fools, however, were those, including half the American media, who were apparently shocked to discover in 2004 that Chalabi had long held the ‘secret’ aim of ‘hoodwinking’ the US to remove Saddam, partly with claims over his ‘weapons of mass destruction’.

Chalabi could be impatient, but he was more often wise. His track record was bringing people together. The Iraqi National Congress was formed in 1992 as the only broadly representative opposition grouping encompassing Iraqi nationalists, the Kurds and the Tehran-based Shia groups including Dawaa and the Supreme Council for the Islamic Revolution in Iraq.

Chalabi personally mediated during the civil war between Kurdish factions in 1995-6, sometimes at personal risk. Some INC officers paid with their lives when Saddam’s forces rolled forward in 1996 to back the Kurdish Democratic Party in that struggle: Chalabi’s security chief Arras Habib, narrowly escaped as Baathist security went door to door.

Amid Iraq’s troubles after 2003, Chalabi frequently interceded, including with the militant Shia cleric, Moqtada Sadr. If he had never wavered in his belief that force had been needed to oust Saddam, Chalabi’s natural preference was to resolve disagreements through dialogue and concession. If he never became prime minister, it was still to his Baghdad home that many Iraqi ministers quietly made their way to seek advice on anything from familial links to oil and finance.

Chalabi’s knowledge was encyclopaedic, his memory phenomenal. After all, this was a man with a PhD in mathematics from Chicago University who had published papers on algebra. It was an unusual preparation for the murky world of Arab politics, and his great banking venture with Jordan’s Petra Bank, leading to its 1989 collapse and his sentencing by a military court to 22 years in prison, left an issue that remains unresolved, with Chalabi always protesting innocence and his many critics alleging fraud.

But it is gently ironic that his death comes as the US and Iran, despite their differences, have not only reached a nuclear agreement but are belatedly engaging over the devastating war in Syria. Chalabi knew very well that Iraq, even before Syria, was a victim of the hostility between Washington and Tehran.

I remember Chalabi in Baghdad in June 2004 insisting to me with unusual force that he had always made clear to the US that his primary loyalty was to Iraq and not Washington. The first example he cited was Iran. While president George Bush had two years earlier declared Iran an ‘axis of evil’, Chalabi said, Iraq needed to achieve good relations with its neighbour, widen economic links and end an animosity going back to the Ottoman period.

Chalabi’s sudden passing, from a heart attack, has provoked a strong sense of loss. “I feel as if a page of history has turned,” Chibli Mallat told me.

Ahmad Chalabi will be buried in the family vault at Najaf. May God have mercy on his soul.

The Tehran Bureau is an independent media organisation, hosted by the Guardian. Contact us @tehranbureau

• This article was amended on 4 November 2015. An earlier version referred to SOAS as the School of African and Oriental Studies, rather than the School of Oriental and African Studies.