Ahmed Chalabi was right that Saddam Hussein had to be removed

The late deputy prime minister provoked many passions, and I disagreed with him over the invasion, but Iraq’s dictatorship had to end. 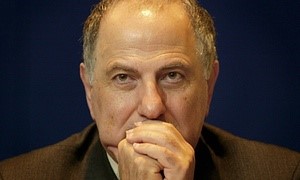 ‘Chalabi holds a special place among those who opposed dictatorship.’

If one had to single out an Iraqi leader responsible for ending Saddam Hussein’s 40-year dictatorship, only deputy prime minister Ahmed Chalabiwould qualify. Both friends and enemies will grant that. Beyond it, however, the dinner table goes up in flames. I never met a person who provokes such passion in Washington, London, Beirut or Baghdad.

Chalabi holds a special place among those who opposed dictatorship. His sudden death was a big shock. I regret the way that controversy over weapons of mass destruction and Chalabi’s financial probity tainted his image. I have seen him dealing with several organisations over the years – the International Committee for a Free Iraq; the Iraq Trust, designed to share the proceeds of oil exports equitably among Iraqis; and Indict, formed to try Saddam et al. There were healthy disagreements in all three ventures, but there wasn’t once a whiff of impropriety in Chalabi’s dealings.

As for WMD, my recollection starts in the mid-1990s. Chalabi had a good rapport with US thinktank the Washington Institute for Near East Policy, or Winep. A long lecture he gave there focused on the danger that Ba’athist Iraq represented for regional and international security. It was couched in WMD-talk language. I didn’t object; in Halabja, gas had been used deliberately by a government for the first time since the first world war. This was a good reason to request accountability for the crime, and sufficient to indict the Iraqi leadership and remove it from power. The prospective use of WMD was more intricate morally, especially because Israel had built nuclear weapons in the Middle East. I argued that the reason we worked against dictatorship was for what it did more than for what it might do. I distinctly remember Chalabi’s response: “This is what they want to hear.”

In the summer of 2002, it was clear we were heading to war. My disagreement continued with Chalabi and others all the way to a meeting with Paul Wolfowitz, two weeks before the invasion. I wanted a security council resolution based on the human rights record of the Iraqi dictatorship and the need to remove it, plus a security council plan to promote democracy through the deployment of human rights monitors. Wolfowitz expressed his support for the idea, but the path to war was set. WMD was the only common platform they could find within the administration, he said.

Chalabi’s view was that I risked missing a chance to finally get rid of Saddam. So yes, it is true that the WMD argument was peddled as the argument for the invasion, but it was inevitable considering the realpolitik dominating in Washington. Whether Chalabi’s intelligence was skewed is secondary. As a good politician he cared to steer his audience towards effective support, and this is what they wanted to hear.

For those who criticise the Iraq war, remember that regime change was law in the United States, passed overwhelmingly by Congress as the Iraq Liberation Act, and signed into effect by President Bill Clinton in 1998. It stood prominently as a foreign policy objective of the Republican party presidential platform in 2000.

The right questions on the Iraq war are: regardless of whether Saddam still had WMD, was it right to remove the worst dictator on Earth since the second world war? And if so, how? On the first question, my conscience is clear. Yes, it was right, and it should have been an absolute priority. Dictatorship is a crime against humanity. As to how, this is an issue for the 21st century. Maybe Chalabi was wrong in his response to this question, but he was not alone.